What is a Groundwater Basin and How is it Used?

Roughly 20 percent of Zone 7’s water supply is available from water that exists below your feet in what’s called a groundwater basin. We are fortunate that sands and gravels deposited millennia ago in our valley provide space between the rock particles for water molecules to sit. If you’ve ever seen water disappear into the soil, you have witnessed groundwater recharge.

Annual rainfall, as well as flow in local streams, help to replenish the groundwater that has been used the previous year. This replenishment is called “groundwater recharge.” Not all soils are conducive to allowing water to infiltrate, which is why you may see areas that pond water after a rain. Just because water ponds does not mean there isn’t a groundwater basin below an area. It simply means that surface water may not be able to seep down to recharge lower layers in that area.

Prior to the 1960s, the Livermore Valley Groundwater Basin had been overused and water had been significantly drained from the aquifer layers. Agreements with the State Water Project (run by the California Department of Water Resources) provide not only surface water through the South Bay Aqueduct to our drinking water treatment plants, but also provide turnouts from the aqueduct that allow water to be routed into local streams to help replenish the groundwater basin through the process of what we call “artificial groundwater recharge.” Zone 7 has been actively managing the groundwater basin since the agreement with the State Water Project became effective.

The graphic below shows you that the basin was being pumped heavily in the early part of the 20th century as population growth and agricultural uses were happening in the valley. The descending line shows that water levels in the basin were dropping drastically (called “overdraft”) until Zone 7 started importing water from the State Water Project to recharge the basin and allow water levels to recover. For more information on how the State Water Project imported water is used, see water reliability. 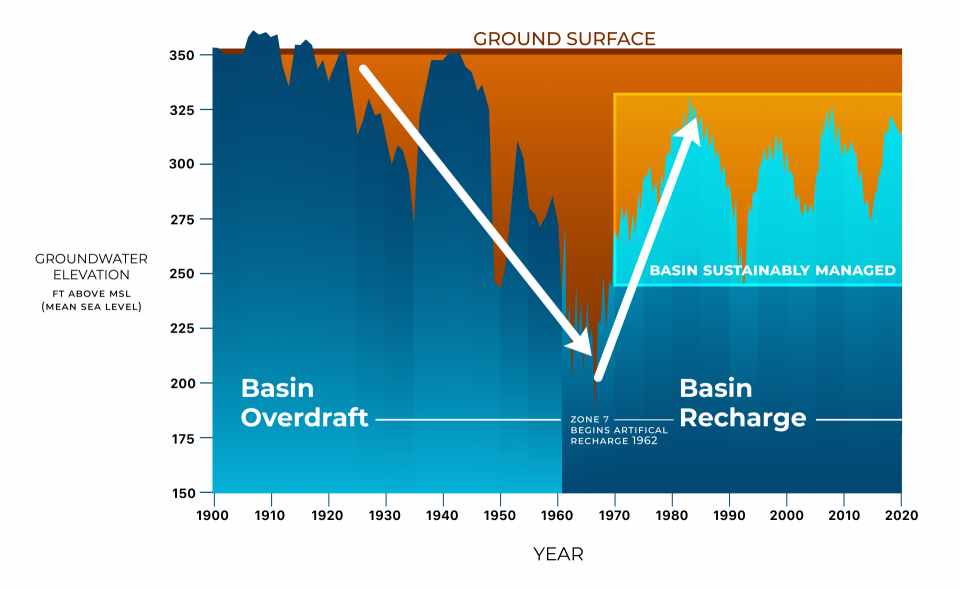 In addition to Zone 7’s use of the groundwater basin, two local water retailers also have municipal wells that extract groundwater for use. In order to maintain the more recent operational range (shown in the gray box of the graphic), the local water retailers have maintained a consistent, contractual groundwater pumping quota (GPQ). This GPQ represents the amount of water naturally stored in the groundwater basin from rainfall that could be pumped for use in any given year. Retailers with wells and those operated by Zone 7 aim to only pump water that is naturally recharged from rainfall or has been “stored” as a part of artificial recharge efforts. For more information on other water banking programs see Banking for non-rainy days.More detailed information about how Zone 7 sustainably manages the groundwater basin is described in our Sustainable Groundwater Management and SGMA section.

In 2014 California enacted the Sustainable Groundwater Management Act (SGMA) where the legislation designated Zone 7 Water Agency as the exclusive Groundwater Sustainability Agency (GSA) for groundwater basins within its boundaries. Zone 7 has a role in all or portions of three groundwater basins. The Livermore Valley Groundwater Basin (DWR 2-10) spans the central part of the valley and portions of the basin exist under the cities of Dublin, Livermore and Pleasanton. The community of Sunol has a separate groundwater basin (DWR 2-11), further described below. A smaller corner of the San Joaquin Valley basin (DWR 5-22.15)lies within the northeastern edge of the Zone 7 boundary. In the San Joaquin Valley Basin, Zone 7 has executed an MOU with the San Luis and Delta-Mendota Water Authority (SLDMWA) to support SGMA compliance, and a GSP for that basin is anticipated in January 2022.

This water basin is designated as very low priority and is not currently a part active SGMA planning; however, Zone 7 continues to act as the basin’s manager and is gathering information for the eventual groundwater sustainability plan for this basin.

For a detailed description of the Livermore Valley Groundwater Basin including cross-sections and maps, see Section 2 of the Alternative Groundwater Sustainability Plan.

Zone 7 proactively manages our groundwater basin to ensure this valuable resource remains a sustainable source of water for future generations of the Tri-Valley.

The Sustainable Groundwater Management Act (SGMA) of 2014 requires local and regional agencies to develop and implement Groundwater Sustainability Plans (GSPs). These plans are detailed roadmaps for how groundwater basins will reach long-term sustainability to ensure these valuable resources are available when we need them.